Streamline Wholesale Operations With Your B2B


Download the free report and learn about the top 3 challenges retailers are facing. 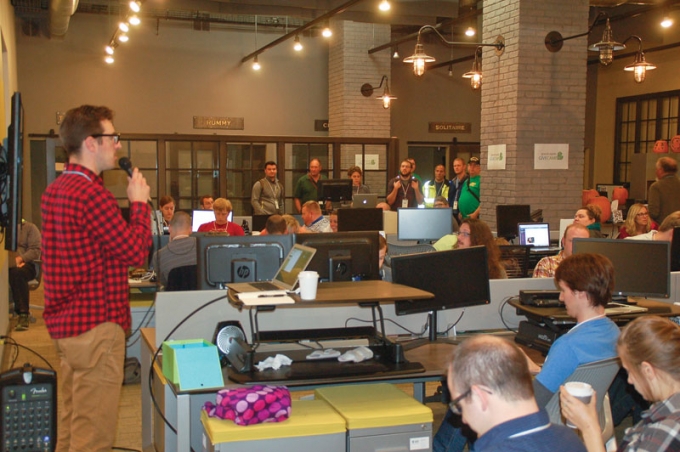 GRAND RAPIDS — A truly successful pet adoption doesn’t end when the animal and its new owner leave the building, according to the Grand Rapids-based Humane Society of West Michigan.

Rather, it requires diligent follow-up to ensure the animal has adjusted to its new home, said A.J. Mousseau, the nonprofit’s director of finance and administration.

The problem: The chore of manually following up with each person who adopted a dog was becoming cumbersome for the Humane Society’s staff. Moreover, the organization couldn’t even execute on that crucial step for clients who adopted cats.

As a result, Mousseau and his team automated the process with technology it accessed free of charge as part of Grand Rapids GiveCamp.

Grand Rapids GiveCamp, which held its first event in 2011, is a weekend-long, no-cost work session that brings together nonprofit organizers and local technology professionals. This collaborative effort is designed to equip nonprofits with solutions that will have an impact on their ability to further their mission.

Mousseau attended this year’s installment with representatives from 11 other organizations. GiveCamp was held on Oct. 23-25 at Open System Technologies in Grand Rapids in partnership with the Michigan Nonprofit Association.

The end result for Mousseau and the Humane Society was a solution that automatically followed up with adoptive pet owners with important information and resources.

“We have some more back-end work to do, so that’s the next step,” Mousseau said. “But we’re anticipating using it soon. We’re hoping by the first of the year.”

NONPROFITS FIGHT TO STAY AHEAD

The significant value that comes with a service like GiveCamp is not lost on Mousseau, who admitted that the project and a recent focus on upgrading the nonprofit’s technological infrastructure has finally put the Humane Society “on par” with other organizations. Mousseau said the group certainly may not be ahead of the curve, but it has made improvements.

The Humane Society isn’t alone in grappling with implementing useful technological solutions. Professionals on both sides — at nonprofits and within the tech industry — admit that the sector as a whole has a hard time keeping up with changing technology.

“The smaller the nonprofit is, the more spread out the resources tend to be,” Mousseau said. “Smaller organizations can really struggle because that’s a piece that tends to fall to the backburner. They’re either paying other people to do it or trying to get by with what they have while they can.”

These noticeable struggles led to the creation of GiveCamp in the first place, said GiveCamp President Chip Kragt, who noted the size of an organization isn’t the only barrier.

“With a small one- or two-person staff, those people are expected to be the I.T. team and that hardly ever works,” he said. “Folks get into nonprofits for their passion — not their strong I.T. skills. With a lack of skills or the lack of a budget, small nonprofits have a hard time prioritizing I.T.

“Even for mid-size or large organizations, what we run into often is that they come with more rigidity. They’re sold on a specific platform or products. It’s not always easy to bring them a new solution.”

Another problem that might be inhibiting nonprofits from investing in sleek, new-aged technological solutions is the potential stigma of frivolous spending that might come with such a purchase.

“The big trend with nonprofits is putting money toward programs,” Kragt said. “The cost for overhead is a big discussion always in the nonprofit community and a lot of nonprofits like to flaunt the small size of their overhead. The business community doesn’t really look at that. Businesses are looking at turning a profit.”

Kragt comes from the nonprofit sector himself, working for an organization called 20 Liters, which labors to deliver clean drinking water to Sub-Saharan Africa.

He serves as a member of the GiveCamp leadership team that involves members of the tech community and the nonprofit sector. This mix, he said, helps develop a program that is beneficial for both sides.

GiveCamp volunteers receive requests for a variety of projects, ranging from something as simple as upgrading a website or brushing up an organization’s branding to more technical solutions.

An educational piece remains integral within the GiveCamp model, as volunteers work with organizers to sketch out an entire I.T. plan — including some give and take.

“Sometimes you have to kind of convince them and say, ‘You’re asking for this, but if we build you (something else), it can streamline the process,’” Kragt said.

Mari-Megan Moore, a designer at Appropos LLC in Grand Rapids, echoed the sentiments that nonprofits struggle to adequately meet their tech potential.

Moore volunteered at the latest GiveCamp, working on a project for BitCamp, an organization that teaches junior high girls how to code in an effort to produce more female web developers. Moore and her team also worked to help BitCamp create an automated process to send out information about its events and track who has signed up.

“Development is a very costly thing,” Moore said. “(Nonprofit staffs) are so busy running their organizations and they don’t have the time or financial resources to invest in this technology infrastructure. (GiveCamp) is great to have.”

Kragt, who will be stepping down as president before a new one is appointed, admitted that it’s a balancing act — having the latest and greatest technology doesn’t necessarily mean anything about an organization’s ability to meet its mission. Still, it helps, he said.

“I think my generation cares about (marketing and staying visible) but we also care about nonprofits that know what they’re doing,” Kragt said. “Good tech can help you look organized and proficient. Focusing on having good technology will win points.” We're waiting to help you get started with your wholesale B2B journey.

Envoy B2B is a wholesale content and e-commerce platform that understands that people are the most important part of your B2B. We put the focus on what matters most - your team. We’ve built Envoy B2B to empower your reps, build stronger relationships with your retailers, and give your brand the power to build a stronger, more successful wholesale channel.

An Appropos Company
Based in Grand Rapids, Michigan